To discover this feature, we will create a custom USB sensor, and forward all events to the Android Things board over USB.

You can see below a video of what we will achieve: the USB device will be an Arduino NFC reader. When scanning a tag (or an amiibo), the Arduino will forward NFC data to the Android Things board over USB.

There are two different ways to communicate with a USB device via Android Things.

In a previous post, we already saw how to communicate with a serial device over UART.
This time, we will use the USB Host API, and the serial communication will be performed using a third party library. That way, the code we will write here will not be specific to Android Things, but will also work on any Android (3.1 and above) smartphone.

We will start with something simple: we first want the Arduino to continuously send the "Hello!" value to the serial port every second, at a 115 200 baud rate.

When we connect the Arduino to the Android Things board, we expect our app to receive the "Hello!" text every second. And for that, we’ll first have to edit the AndroidManifest.xml.

We want to be notified when an external USB device is attached to the Android device.
This can be done adding a new intent-filter entry to the Activity that should be started by the system when a USB device is plugged in.
Also, we will add a meta-data element pointing to an external XML resource file (here in res/xml/device_filter.xml) that declares identifying information about the device that we want to detect.

If the device_filter.xml file has the following content, we will be notified each time any USB device is plugged in:

This is not exactly what we want. We only want to be notified when the Arduino is plugged in, and ignore all other USB devices, so we will add a specific rule.

After connecting the Arduino to the Android Things board, we can consult the kernel logs using dmesg to get some device information:

We only want to be notified when the Arduino (idVendor=0x2341) is connected, so we will specify this vendor id into the usb-device tag:

Note here that the vendor-id expects a decimal value, not a hexadecimal one.

This filter will be enough for us. For a complete list of what we can do, please refer to the USB Host documentation

Our Activity now receives an intent each time the Arduino is plugged in.

We will first list all the connected USB devices, and open a USB connection if the Arduino was found:

The startSerialConnection method will use felHR85’s USBSerial library to open a serial connection between the Arduino and the Android device:

The UsbSerialDevice.read() method takes an UsbReadCallback reference which will be called each time data is received. Here is a simple implementation:

We convert the byte[] data to a UTF-8 String, and log this data.

Now, each time data is sent from the Arduino over USB, the callback is triggered and data is logged. We can run adb logcat to confirm that we receive the “Hello!” message from the Arduino every second:

For a complete and optimized source code, take a look at github.com/Nilhcem/usbfun-androidthings.

Printing "Hello!" to the logs every second is quite boring.
A fast way to add some fun to this project is to connect an NFC module to the Arduino and send NFC tag data from this module to the Android Things board over USB.

I used Elechouse’s PN532 Module over SPI, using this sketch. 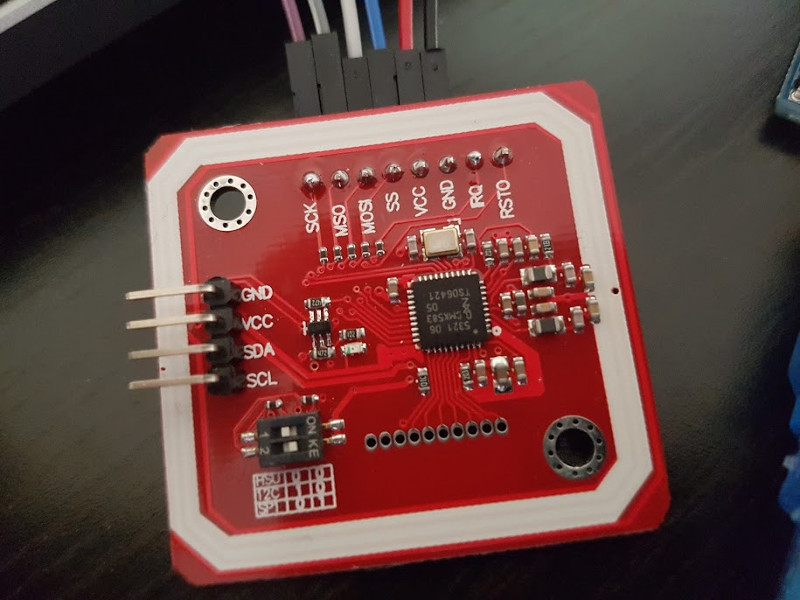 To simplify, I am only forwarding the tag ID to the Android Things board. And the Android app displays an appropriate image depending on the received ID.

Porting this project to an Android smartphone

As explained in the introduction, the project uses the USB Host API from the Android SDK, and is therefore fully compatible with any Android smartphones or tablets (minSdk=12). If you own a USB-OTG cable, you can plug an Arduino directly to your phone.

Below, a demonstration (with sound) of an Android phone, sending data to an Arduino over USB to play music on a piezo buzzer. (source code is available here)

A better example of what you can do with the USB Host API is the official USB enum sample.
This project iterates over all the USB devices discovered by the host and prints their interfaces and endpoints.

Reading the source code is interesting here as we can learn about USB descriptors.

For example, after a USB device has been detected, it is opened using the same API we used in this article (via UsbManager.openDevice()), then, instead of opening a serial connection, the code immediately queries the USB device and configuration(s) descriptors:

When reading the USB specs, it is specified that all USB devices must support at least a default endpoint. Any transfer that targets this endpoint is called a control transfer, and is a way for the host to obtain device information.

Then, the code receives data from the buffer, as specified in the documentation.

And so on. Once we understand that, the sample code is much easier to read.

This post introduced an example of how to use the USB Host API with Android Things.
In a real-life scenario, you won’t need to use an Arduino to bring NFC support to Android Things, as you can develop the NFC driver directly, and even if you need to, you may be able to communicate with the Arduino using the UART API directly. You may not need to use the USB Host API + a third party dependency.

If you own a USB-Serial device and if this latter is recognized by the kernel, then using the UART API is the easiest and recommended way to communicate between both devices. But if you need to access any kind of USB device from an app, then you’ll be happy to have a user-space USB support on Android Things.

As Marcos Placona explained in a blog post, some components need super-fast drivers (sending signals that alternate from vcc to ground in a few microseconds). While this is not possible yet with Android Things, you could use a microcontroller that acts as a proxy and directs data to the Android Things board over USB, to use those components in your Android Things projects.