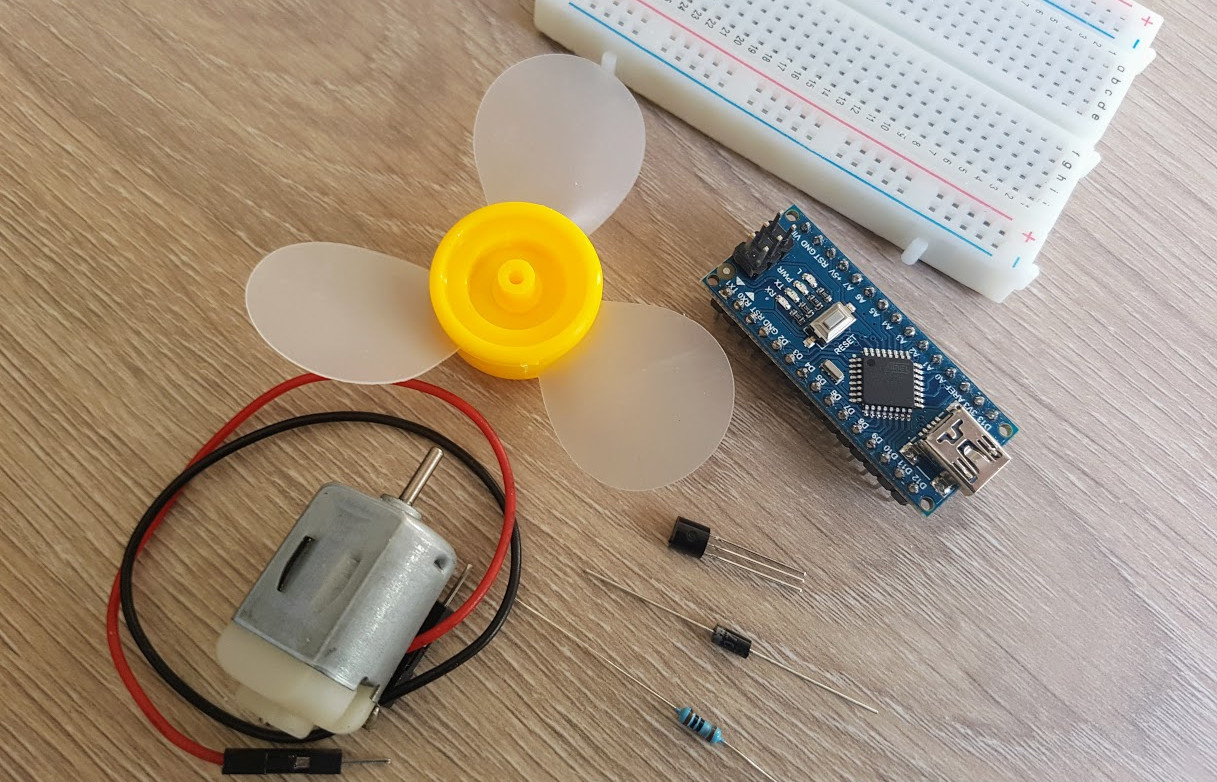 It is often interesting to use a microcontroller with Android Things when you need some peripherals that require to send/receive pulses at a really fast frequency, or simply if you are too lazy to create a driver for a given peripheral when you are prototype something quickly.

If you are using, for instance, a DHT11 humidity & temperature sensor module, which sends pulses from 26-28μs (data bit “0”) to 70μs (data bit “1”), you will notice that it won’t work with the current version of Android Things which has a GPIO frequency around 3kHz (~300μs pulse duration).

An easy way to bypass this issue is to use an Arduino and communicate between the Android Things board and the Arduino over either UART, USB, SPI, or other ways.

Today, we will exchange data between an Android Things board and an Arduino over I²C for 3 reasons:

We will build an Arduino-powered fan. Using I²C, the Android Things master device should be able to:

Here’s a sum-up of all the I2cDevice methods provided by the Things Support Library.
With those, you can read or write data (either one byte, two bytes, or as many as you want, in a buffer).

Registers help understanding where you are reading from or writing to.
You can consider those as categories or actions. When you write some data to a register, it is easier to understand what will be impacted by this write operation.

In our project, we will use 2 different registers

Those 2 registers will be enough to perform the following actions:

We can now write an Android Things driver for our I²C Arduino fan:

That’s all!
We only need to write around 20 lines of code for a full working Android Things driver.
Now we can call the following methods to start the fan, set the speed to high for 5 seconds, query the fan speed, then turn it off:

And we are done with the Android code. Let’s now write the microcontroller code.

We will use the Wire library that allows us to communicate with I²C devices.

First, our Arduino needs an address on the I²C bus, we chose arbitrarily 0x42.
Then we register 2 callbacks:

If you remember well, the readRegByte(int reg) method from Android Things takes as argument a register.
However, as you may have noticed reading the code above, the requestEvent callback from Arduino does not take any parameters, so how do we know which register is concerned?

When you call a method that involves a register, such as readReg[Byte/Word/Buffer], the receiveEvent callback from Arduino will first be triggered and we can get the register value from here and save it in a variable. Immediately after, the requestEvent callback will be triggered, and since we know which register is concerned, we can send back the proper data.

With this in mind, here’s the full implementation of the Arduino sketch, given the following constants:

The Arduino sketch is written and deployed, now we have to build the hardware.

Our fan is just a simple DC motor, so we will use the following components:

Let’s connect everything together and test it: 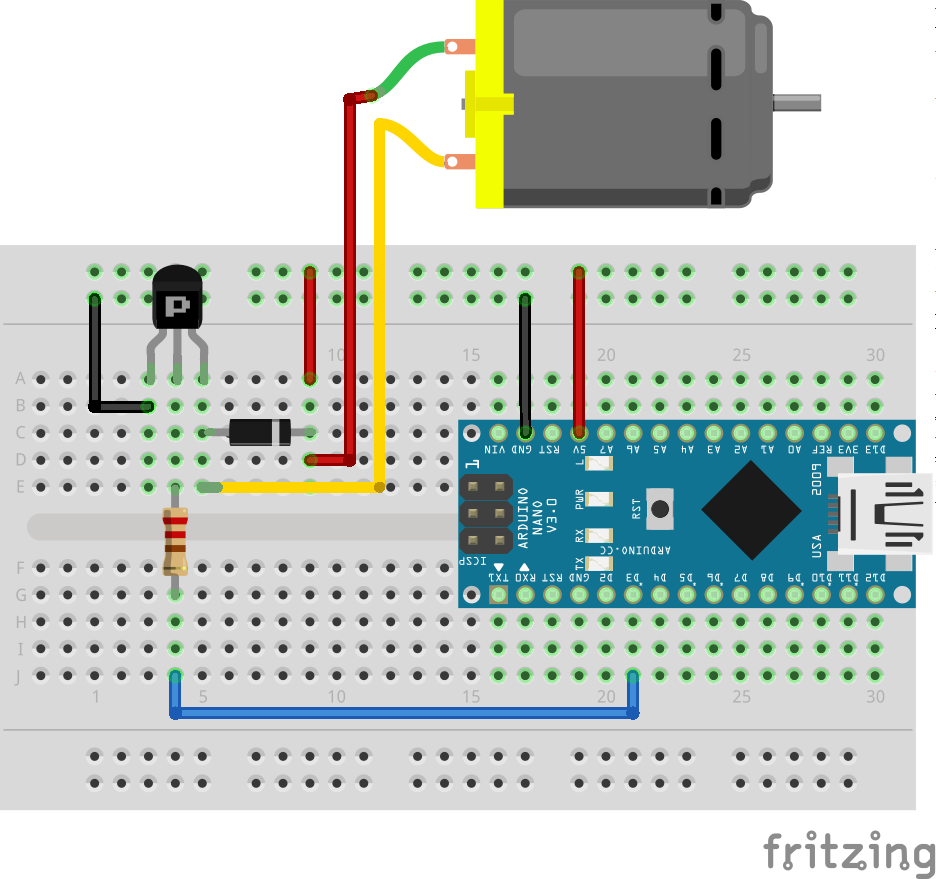 Connecting the Arduino to the Android Things board

Careful: If your Android Things board is a 3.3V device (such as the Raspberry Pi 3 or NXP Picos boards), you will need a bi-directional level shifter for the I²C bus, so that inputs from the 5V Arduino won’t damage your board.

You can find the complete source code on GitHub:
https://github.com/Nilhcem/i2cfun-androidthings/tree/arduino_slave 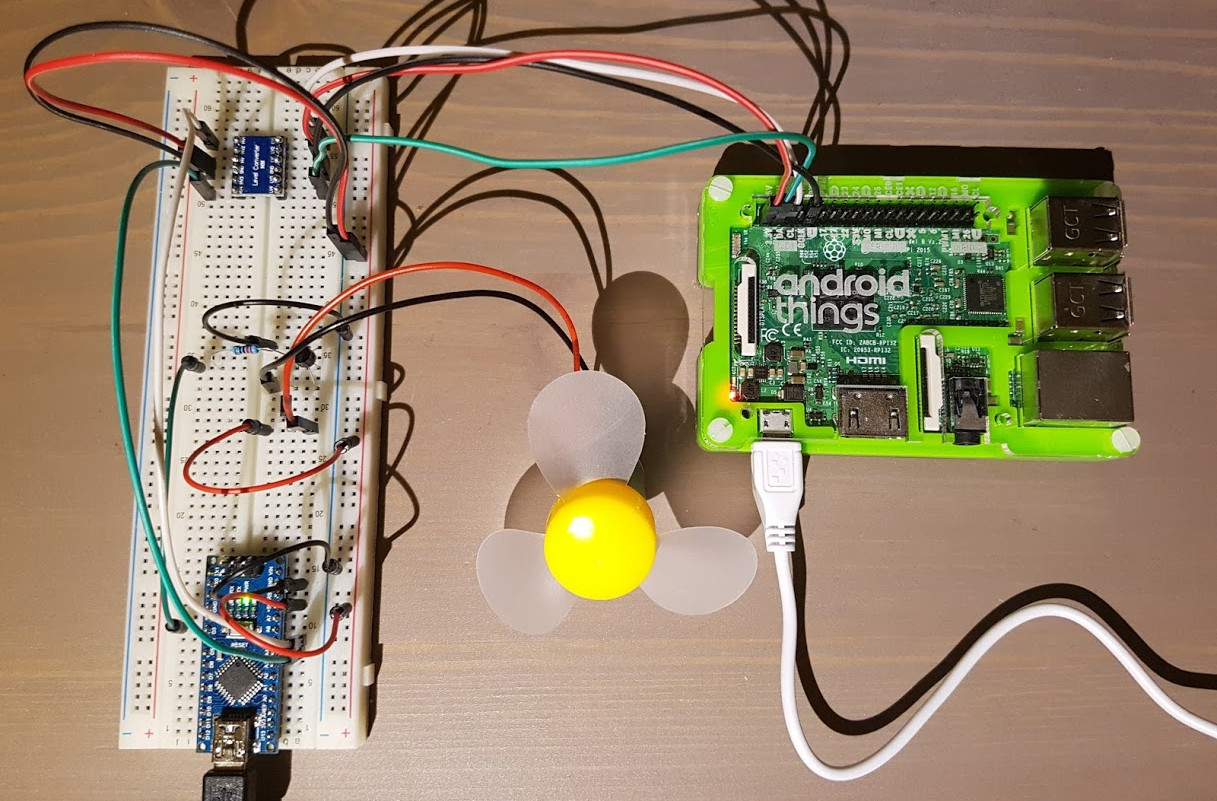 In the following article, we will re-use this homemade device to demonstrate how we can connect multiple I²C devices to the same bus.